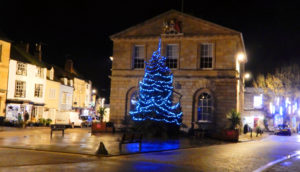 This year was one of our most memorable evenings singing Carols for many different reasons the top one being the help we received from all the businesses in Woodstock who very kindly agreed to let us come and sing to their customers for Oxford Winter Night Shelter.

As always on this night there is a sense of excitement as we travel by bus and car to Woodstock no matter what the weather.  We arrived at our starting point The Punch Bowl and met our club President Michael and waited for the others to arrive.  We did hit a snag though, once everyone had got there to discover we had to improvise a collection bucket and in true Christmas Spirit The Punch Bowl helped us out and with Rotary members, bright ideas came up with a solution. We were then ready to go and the excitement was palpable but we had a warm-up in the pub first before we went to our first stop. 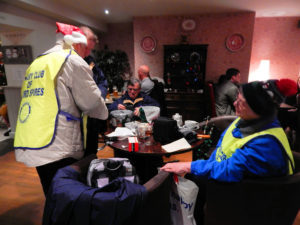 Our first stop was The Crown on the High Street which was atmospheric and gave us such a warm welcome as we started with O Little Town of Bethlehem and a couple of others and left singing we wish you a merry Christmas it was brilliant fun. 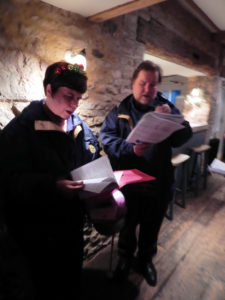 The historic Bear Hotel was next on our schedule which had been organised by club members Ann & President-Elect Philip. The Bear is a 13th Century coaching Inn and it feels like you are stepping back in time when you sing carols there, it’s such a great feeling. We then moved on to see our friends at The Feathers Hotel where we sang in their Restaurant While Shepherds Watched to On Ilkley Moor Bar Tat & Silent Night. 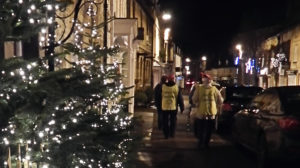 After our turn at The Feathers, we headed onwards to two Arms The Kings Arms and The Woodstock Arms it is at these lovely pubs that we get audience participation and requests and this year was brilliant as we had both and when you are halfway through and getting tired feet it gives you such a boost. Thanks, everyone!

The Da Ba was next and a small group of us went in and sang there which is always a joy and we look forward to it each year. After that, we went to Brotherton’s Brasserie where we branched out from carols and surprised a lovely lady called Jess with Happy Birthday brilliant. Philip conducted us in superbly.  We always do The Woodstock Social Club when we can and we were happy to be back again this year.  I mentioned audience participation, well this is where they come up and sing with us and it puts the sugar on the mince pie so to speak as we sang Rudolph and Jingle Bells not forgetting White Christmas.

Speaking of Mince Pies a massive thank you to The Punch Bowl for laying on the pies and hot drinks for us at our final stop.  You can see how we did in the video. We sang Silent Night, While Shepards Watched and did the Twelve Days of Christmas with actions before we sat down and relaxed.

The wonderful result was that we raised  £267.48  for Oxford Winter Night Shelter thanks to Woodstocks Businesses and customers that helped us and donated on the night.  A Very Happy Christmas to you all. 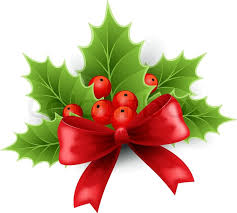