At our club meeting on Tuesday 26th November we were pleased to welcome our two current Rotary Scholars Jelka and Emilia. Both are studying for a PhD at the University of Oxford and both are hosted by our club and funded in part by our Rotary District across the Thames Valley. 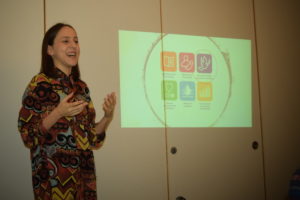 Jelka is just starting her PhD in the Department of Experimental Psychology and she explained her interest in emotions and emotional expressions in our faces, how we interpret those expressions and then adjust our own behaviour accordingly. Jelka is interested in how this works in groups, when social identities take over individual identities, such as among football fans. Jelka will be testing some eye tracking software in the lab, watching which parts of a face people look at when shown a photo, and then she will take this out into the field.

We discussed behaviours of football fans and how misunderstanding can quickly lead to aggressive behaviour. Ultimately though, Jelka is interested in using this research to work in post conflict areas such as her home country of Serbia and in Northern Ireland, understanding communications and behaviours between different groups where tensions may still lie after the leaders have declared the conflict over.

Emilia is in her third year of her PhD in the Department of International Relations. Her research is also related to her home country, Mexico, looking at economic development in rural areas. Since Emilia had already spoken to us about her research, she instead told us about an amazingly ambitious project being led by her sponsor Rotary Club, Uruapan Rotary, west of Mexico City. Emilia spoke about the club’s project focussed on the Santa Barbara River and the Santa Catarina Dam.

The project was initiated when those using common land along the river approached Rotary for help. There was recognition that those downstream are affected by water use and water pollution upstream, and that as the city grows those moving in might have less access to resources and the city’s services. It has developed into a project that aims to improve access clean water and sanitation as well as develop spaces for economic development and social activities. Rotary is working in partnership with the local university, local government, agricultural organisations and community groups.

So far an ecological urban park has been developed, with more than 1,000 trees planted by groups including university students, and members of Rotaract and Interact. The toilet blocks are almost complete, benefiting an expected 30,000 visitors per year. Footpaths, sport facilities, libraries, and restaurants are planned, as well as improvements to the waste water treatment plant.

Those at the meeting were impressed by the scale of the project and the way in which Rotarians, Rotaractors and Interactors are working with so many groups in the community to make a real difference. A great example of People of Action!